Now in its 28th season, the popular competition show Dancing With The Stars is known for having a cast full of fierce competitors and surprises. This year, the show is facing serious backlash for including a new celebrity cast member: Donald Trump’s former press secretary Sean Spicer.
First, let’s explain how the show works. Hosted by former AFV host Tom Bergeron and television personality Erin Andrews, Dancing With The Stars partners a host of celebrities with professional dancers to compete in a ballroom dancing competition. Three judges (Carrie Ann Inaba, Len Goodman, and Bruno Tonioli) rank each dance on a scale of 1-10 points. After all partners have performed, points from the judges are combined with audience votes to determine the bottom two couples. The judges then decide which of the two partnerships are going home. So, you might be wondering… what would a disgraced Trump official have to do with this?
Sean Spicer is a terrible dancer. Each week, he repeatedly received the lowest scores. At one point judge Bruno Tonioli described the steps in his sea-inspired dance (above) as “getting lost in the Bermuda Triangle”, and remarked that “Dory has a better sense of direction.” Even so, Sean Spicer was never in the bottom two until his elimination in the quarter finals– weeks after far better dancers had been eliminated. Why, you ask? Half of the competitors’ final scores depend on votes from the public.
All over the internet, far-right groups have been gathering support to vote for Sean Spicer every episode as many times as possible for the sole purpose of, in the words of far-right twitter user @Keep_Texas_Red, “piss[ing] off those liberals!” This seems to be a common theme in tweets supporting Sean Spicer on DWTS. Even individuals from the Trump family have tweeted in support of the former staffer. President Trump himself tweeted that everyone should “Vote for @seanspicer on Dancing with the Stars. He is a great and very loyal guy who is working very hard. He is in the quarterfinals. All the way with Sean #MAGA #KAG.” He later deleted this tweet, as it was posted the night Spicer was eliminated from the show. 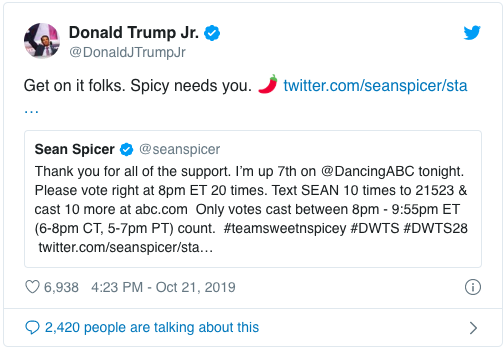 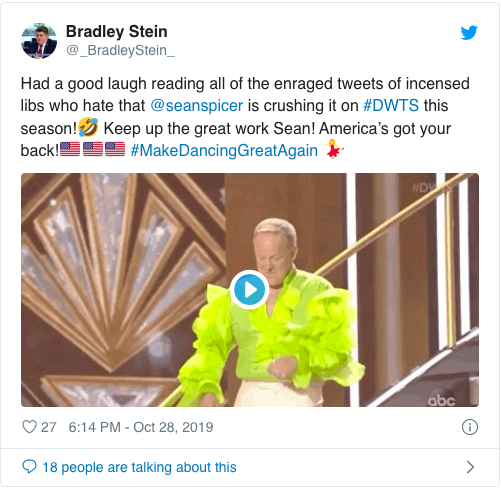 There were two groups of people who continued to vote for Sean Spicer. The first were purely internet trolls who enjoyed watching everyone get upset. The second were the group described in the paragraph above: conservative Republicans trying to get one of “their own” to win, as several users described it.
However, these actions do not come without consequences. Karamo Brown, voted off DWTS in favor of Sean Spicer, said he felt “cheated” and rescinded his statement that the two had grown close as friends over the course of the show. Even the judges issued public statements about how long Sean Spicer has managed to stay a competitor; judge Carrie Ann Inaba said that although she has respect for the people voting “just to spite [the show],” she wishes they could have “a little respect for the people working their butts off dancing.” All three judges made statements reminding the public that DWTS is supposed to be based on skill instead of just popularity, an obvious dig at Spicer. However, any show where regular fans can control how their favorite celebrities perform is bound to have some bias.
To gain more insight, we reached out to the Sean Spicer’s staff for comment on the issue. Sean Spicer’s office responded with the following comment from Sean Spicer: “I did this as a one-off to have fun and enjoy myself, learn something new and meet great people. Now I get to go back and spend some time with my family, for once, and get back to business.”
Unfortunately, this seemingly innocent “one-off” has caused much controversy surrounding the show. From tweets, we can see that the purpose of this ploy is to anger liberal viewers, making them seem irrational and overly political for getting upset about the results of a competitive dancing show. As politics in the White House get more and more cut-throat, any excuse for conflict between parties is an opportunity to get in a dig at the supposed “enemy.” However, this incident seems as it has not had much of an effect on the show itself. Although Dancing With the Stars is departing from its twice-yearly format, as Season 29 is expected to air in Fall 2020, there is currently an active tour of the pro dancers, with other events possibly planned for the future.

If you want to see videos of Sean Spicer’s performances without having to watch the entire episode, they are all over YouTube. Below are links to some of his dances: