An ape-like man drops from a tree and lands on the steaming ground of South Africa on all fours. Lifting his nostrils in the air, he takes a big whiff of the dry summer air and takes off, following his nose. Sprinting across the plains, he comes across what he has been looking for: the fresh carcass of an antelope left by lions. This ape-like man ran for a different reason than a man at a gym today. The purpose of running has changed over time, with each change reflecting the values of the people of that period. For the prehistoric man, survival was important, so his body evolved to enable him to run and hunt on land. In ancient civilizations, people ran to honor the gods during religious celebrations. In modern times, people run for sports and fitness. Understanding the changes in why people run gives us an insight into what is important to that culture.

The ape-like prehistoric man evolved physically to run on land in order to increase his odds of survival. This physical evolution changed prehistoric man from Australopithecus to Homo sapiens. As biologist Dennis Bramble says: 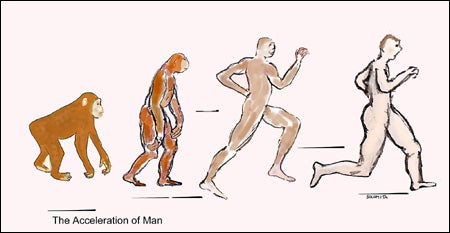 “We are very confident that strong selection for running – which came at the expense of the historical ability to live in trees – was instrumental in the origin of the modern human body form. Running has substantially shaped human evolution. Running made us human – at least in an anatomical sense. We think running is one of the most transforming events in human history. We are arguing the emergence of humans is tied to the evolution of running.”

Because running changed ape-like beings swinging in trees to humans living on land, running is what distinguishes humans from their ape-like ancestors. In order to hunt for meat on land instead of getting by on food found in trees, the ape-like body evolved into the human body that can run fast. For instance, short toes developed to push off effectively while our buttocks grew to prevent falling over when running. These physical features enabled Homo sapiens to catch prey faster than other carnivorous competitors. Early man ran in order to hunt meat on land for survival.

As human civilization advanced to a point where food for survival was no longer a concern, religion became the primary reason for running. One of the greatest examples of this is when the Greeks started the Olympics. In 776 B.C., the first Olympic games began to honor the chief Greek god, Zeus. Three of the five events were foot races. According to the Scholastic magazine, these foot races were popular and prestigious events, honoring their gods greatly. This idea of honoring the gods with running races as a form of human excellence and achievement was very popular in other cultures. Sometime between 1829 B.C. and 632 B.C., Ireland began their Tailteann Games to honor the Tailteann, the earth and harvest goddess, and the dead. Some of these events were running races of various lengths including a long distance. Running for religious celebration continued in Scotland. In 1040 A.D., King Malcolm Canmore established the first “fell” run, where people ran and tumbled across moors and hills to celebrate religious events such as Easter and harvest. Religious running dwindled as the importance of religion declined over time.

Running entered its modern era when it began to be used for competitive sports and recreational fitness. In 1896, Pierre Coubertin campaigned for the revival of the Olympic Games but as a sports event rather than as a religious event. Thus after a gap in running history, foot races were finally restored to their former glory. In New Zealand, Arthur Lydiard started the Auckland joggers club in 1962 for people to take up fitness and social running. American Bill Bowerman joined this club and later returned to the U.S. to write Jogging, a book which is credited for having first sparked the running craze during the 1970s. When American Frank Shorter won first place in the men’s marathon in the 1972 Olympics, he ushered America into a golden decade where American men were considered the best in the world at running. This success in competitive running ignited what experts called a “running boom” where 25 million people took up running for social and fitness reasons in the U.S. during the 1970s. Today, even non-athletes can run too, because running is not for religion anymore, but for recreational purposes.

When examined through a historical lens, the reasons for running changed dramatically over the years. In early years, people ran initially to hunt and later to honor the gods with athletic excellence. More recently, the purpose shifted from religious reasons to competitive sports and recreational exercise. With each change, the reasons people run reveals a lot about the concerns and preoccupations of the people of that time.