The French overseas territory of New Caledonia, located in the Pacific region known as Melanesia, held an independence referendum on November 4, 2018. With an 80% turnout, 56% of voters voted against independence from France. Despite this, a treaty with France which was signed in 1998, known as the Noumea Accords, give New Caledonia the right to have two more referendums; in 2020 and 2022, respectively. In this article, we will explore what an independent New Caledonia might look like should one of those referendums swing in a different direction.

According to the United Nations, an independent New Caledonia would have a GDP of $9.8 billion USD, making it the world’s 138th-largest economy; larger than Haiti but smaller than Guinea. The New Caledonian economy relies heavily on the investment of France, and an independent New Caledonia could be charged with finding new stimuli for their economy, depending on the terms of independence. New Caledonia could potentially have an agreement with France similar to the agreement which the United States has with a fellow Oceanian country, the Marshall Islands, in which the Marshall Islands uses the US Dollar and receives heavy American investment. In terms of population, New Caledonia would have the 175th-largest population in the world at just around 280,000, but would be the 7th-largest in Oceania. This would make the GDP per capita $35,000, placing it a surprising 28th in the world, ahead of world powers like Italy and South Korea, and just slightly behind France and Japan; in Oceania, only New Zealand and Australia would be ranked higher in GDP per capita. Thus, New Caledonians, assuming they can find good economic stability, will, on average, have the best quality of life in Melanesia.

The ethnic makeup of the nation presents a circumstance common in other Pacific nations: political tension between indigenous islanders and Europeans. The ethnic makeup of New Caledonia is about 40% Kanak, who are the main Melanesian ethnic group, 35% white, 11% other Melanesian groups, 9% mixed race, and 5% asian groups. The Kanak are the main drivers of the independence movement, where as the white residents of the island, mainly of French descent, favor remaining under French rule. Although there is no violence between the two groups, they are split over this crucial issue. The racial dynamic may very well change following independence, and its possible that there could be a major exodus of whites living on the islands; they may return to France or perhaps move to French Polynesia. As for religion, half of the country would be Roman Catholic, and there would be a large protestant minority as well; in terms of language, almost everyone would speak French, but Kanak languages would be somewhat common as well.

The greatest geopolitical challenges which New Caledonia would face are their isolation and their small landmass. New Caledonia is closer to Australia than most of its Pacific neighbors but still very isolated on the world stage. This means that trade will be difficult and goods will be expensive for the islanders. Although New Caledonia has fewer islands to unite than other Pacific nations such as Kiribati or The Federated States of Micronesia, uniting the main island, Grande Terre, with other outlying islands under the same flag could prove to be a challenge for the new government. Aside from geopolitical issues, New Caledonia’s terrain could also pose some issues for the new nation. The islands are having issues with erosion due to mining, and this is currently the biggest threat to the landmass. Sea level rise is not a huge issue in New Caledonia, as its land and pastures are fairly elevated; the highest point is Mont Panie at 5,341 ft. Despite having elevated land, erosion still poses a risk to the nation’s already short supply of arable land (currently about 10-15%), most of which is on the coastal plains near the ocean. Because of these impediments to agriculture, the New Caledonian nation would probably have to rely on tourism to be a large part of their economy. The Noumea International Airport, although not decrepit by any stretch of the imagination, could use upgrades to attract more tourists. Although French regularly visit, the challenge for New Caledonia would be to attract tourists from other wealthy nations like the United States, who already visit Pacific archipelagos like Fiji and French Polynesia in heavy numbers.

The country would have an area of 7,172 square miles, making it the 163rd-largest in the world, just behind Cyprus but nearly double the size of France’s French Polynesia. Due to its small size and population, New Caledonia would have a nearly non-existent military presence; currently there are only 1,750 French soldiers stationed in the country and it’s unlikely that the new nation would waste precious resources to build their military to be anywhere close to that already tiny number. Its population density is just 13 people per square kilometer, which is very low, meaning it has many wild forests which have gone mostly untouched by both civilians and French military personnel. New Caledonia is world-renowned for its vast wealth of endemic species and biodiversity, and this would help to attract tourists; although not nearly on the level of the Galapagos in terms of biodiversity, it could certainly be marketed as such. 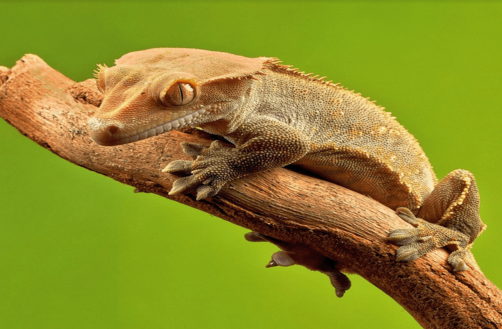 The crested gecko, endemic to New Caledonia, which was thought to be extinct before its rediscovery in 1994 (courtesy Wikipedia)

New Caledonia’s athletic accomplishments are minimal, although they are members of FIFA. The most popular sports, like most Pacific nations, are rugby and football (soccer). Along with these two main sports, extreme sports are also fairly popular on the islands, especially among tourists.

Overall, despite its geopolitical and topographical challenges, an independent New Caledonia would be fairly stable due to a likely dependency agreement with France, and would certainly become a tourist hotspot as the world’s newest nation.